History Of the Greensboro Terminal

Founded on a handshake and built on the ingenuity of our team, our Greensboro Terminal remains one of our busiest locations and a reminder of the massive strides our team can accomplish.

Our Greensboro terminal has been a growing staple of the Associated Asphalt since our chairman, Bill Kirk, closed the deal on it with a handshake (so the legend goes around the site) in 2004. The terminal’s twenty-one-man crew currently supplies our customers with concentrate, base products, and specialty products when the need arises; it’s a versatility grounded in a history of innovation.

A Foundation of Problem-Solving

In 2005, the site originally was manned by a seven-member crew who oversaw the production of three base products and one additive. The complex possessed only sixteen rail spurs, eleven storage tanks, and a single tank of avgas to fuel operations. It continued in a light support role until 2011, when the Greensboro Polymer Modified Asphalt (PMA) Plant, as the site’s known today, was born.

Located about 2 hours from our Roanoke headquarters, updating and building out the infrastructure for the PMA process was a technical and operations puzzle in a region that couldn’t afford a full shut-down of the plant. But our team rose to the challenge of making necessary modifications and additions to produce the new product while still continuing to be one of the busiest throughput terminals in Associated Asphalt family. There was never any task too large for the Greensboro team. 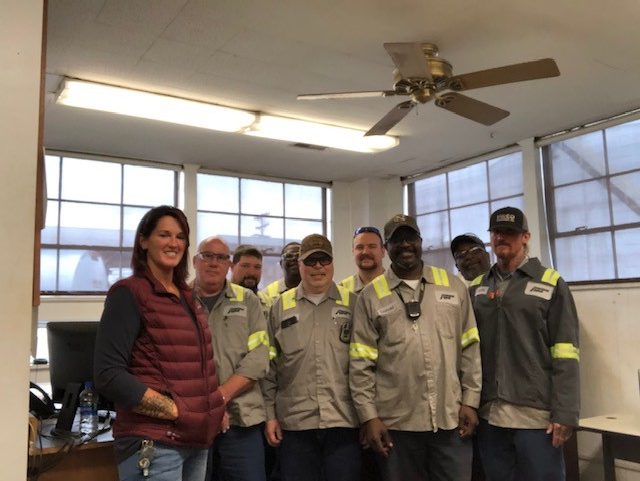 When the expansion was complete, the Greensboro plant now possessed the ability to spot eighteen railcars on two spurs and two additional large storage tanks, not to mention additional PMA storage tanks.

A Future of Versatility

With its twenty-one teammates and fully capable facility, the Greensboro site is well-positioned to continue growing alongside the company as it services more and more customers. And with the achievement of overcoming all the site’s technical challenges under their belt, this location and its crew remain ready to solve “brain busters” that arise day and night for our customers in the years to come.

“My experience and the growth that I have witnessed at the Greensboro terminal is how supportive and considerate Colleen, Bruce, and Mark have been in their role at Associated Asphalt. They go beyond to put situations in the correct perspective, which is significant growth of a team,” Anthony Benton.

We look forward to being a longstanding solution to the region’s transportation needs for years to come.